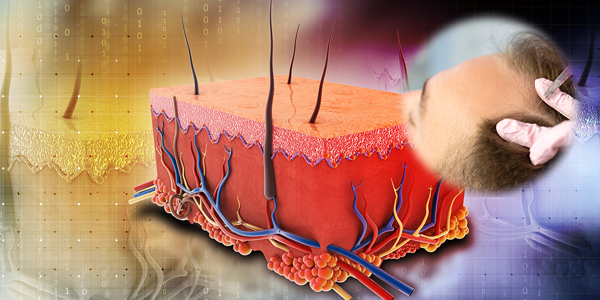 GCell® Autologous Tissue Suspension-MicroGraft is a new method based on capillary and tissue regeneration therapy in fighting against hair loss and tissue renewal. In this method, a tissue suspension obtained from the autologous cells of person is used to renew hair skin and tissues.
GCell® Autologous Tissue Suspension-MicroGraft Method is a reliable and effective method developed recently in order to struggle against androgenetic alopecia and other hair loss problems. The application is for one-session.

GCell® produced for the application used not only in the renewal process of hair but also that of the tissues in the body in general sense is a device specifically produced to apply the tissues received from the patients for renewal process in clinical environments.
In the application, the cells received from the patients’ own bodies (scalp for hair treatment) are processed and injected, and in this way, the (precursor) cells in the treated area is increased.
This method was resulted from many clinical studies based on the presence of follicle cells found in tissues in high amounts and that of stem cells and other cells that support them. Entire process of collecting the cells, preparing the tissue suspension and activization is completed through physical processes.

How long does the application take?

GCell® Autologous Tissue Suspension-MicroGraft Procedure is highly comfortable and carried out within 30 mutes approximately by using local anesthesia in clinics and let people go back to their daily activities right after the application.

Capillary vessels that feed the hair roots start to be renewed after the application. Accordingly, the tissue which has been fed through this application start to recover with the impact of the progenitor cells added inside. Since the process is biological, it varies for everyone and its effects start to be observed after 3 or 4 months. However, visible effects are obtained nearly after 6 months following the operation.

* To protect and refresh the existing hair
* Thicken and strengthen long but weak hair
* GCell® Autologous Tissue Suspension-MicroGraft System thickens high number of weak
and thin hair and help individual have a dense hair.
* Activate inactive hair cells under the scalp and make them grow onto the scalp
* GCell® Autologous Tissue Suspension-MicroGraft increases the success of hair
transplantation by applying during, before and after the transplantation.

It is used for andogenetic alopecia and other hair loss problems. Also, it is used to increase collagen emission in Anti-Aging applications.
It is approved by the Ministry of Health and is CLASS 2A CE Certified.

Is it safe? Does it have any side effects?

It is a natural, safe and side effect-free application since the person’s own cells are used. It enhances the hair quality because it enables scalp to recover and gain the normal structure again.

How many sessions should it be applied?

It is enough to apply GCell® Autologous Tissue Suspension-MicroGraft as one session. The effects of the process starting upon the renewal of capillary vessels following the application starts to be observed within 3-4 months.

What is the application duration?

Tissue samples collected from the hairy tissues are placed into GCell® kit and processed for nearly 5 minutes. Then it is injected into the application area and the process is completed within 30 minutes. People can go on their daily life after the application.

Does it have any side effects?

Any harmful side effect is not expected to happen since completely the person’s own tissue is used. Scalp and current hair density are recovered through this method where person’s own cells are used and new hair follicles grow.
This application enables hair to have its normal structure. In this way, since it increases the density and thickness quality
of the hair, it brings the hair loss to its normal course. Besides, it promotes new hair growth and help you have a nice appearance.

Can it be only applied to men?

The procedure is suitable for both women and men.

Can it be used instead of hair transplantation?

It can be used within the scope of hair transplantation processes when necessary but it is not an alternative option. It facilitates the recovery period in hair transplantation, thus it minimize the complications and enables to have effective results in a short time period.

The tissues of the patients collected via punch biopsy are gone through a special process and transformed into a tissue suspension. And then it is injected via mesotherapy by using fine needles.

When can the results of GCell® Autologous Tissue Suspension-MicroGraft Method be observed?

It varies from person to person; however, its effects are started to be seen after 3 or 4 months while the visible effects are visible after 6 months.

Can GCell® Autologous Tissue Suspension-MicroGraft Method be applied to everyone?

Yes, it can be applied to women and men.In addition to hair loss, it can be used to strengthen hair that become weak because of dyes and other procedures applied to the hair in hair dressers, etc.